Following up on his interview with ‘Vanadium Queen’, Maria Skylass-Kazacos published in our September issue, Dermot Martin looks at why the UK Government has given the green light for an easier route to energy storage technology.

Solar energy and wind power are replacing fossil fuels as sources of green energy. But an efficient method of storing that energy, for use when needed, remains a serious problem. Many believe the answer lies in large scale chemical flow batteries.

In June (2020) the UK Government loosened the planning rules on large-scale energy storage units making the outlook for the battery technology industry brighter. One battery design in particular stands out – the Vanadium redox flow battery (VRFB). Redox flow batteries have been touted as one answer to storing renewable energy, so it is surprising that progress with their development has been glacial.

This is in contrast to Lithium batteries which are now ubiquitous in the myriad of small electronic devices we use, but only when it comes to large scale or utility energy storage applications, Lithium-ion based batteries do not seem to cut the mustard.

It took four decades for Lithium-ion battery technology to reach its zenith, but they lack the crucial ability to offer large-scale storage potential. Lithium-ion batteries need supporting trace elements, Cobalt and Nickel and this has created headaches around geopolitics and economics as well as raising questions about the protection of the environment. When it comes to recycling, the traces of Cobalt, Nickel, and organic electrolytes are problematic. About 60 percent of that Cobalt comes from one country, the DR of Congo, where the use of child labour in mining is rife and corruption in the Cobalt supply chain is well documented. Lithium batteries have also proved to be a fire hazard in certain conditions.

The need to find a cheap efficient means of large-scale storing of energy generated by wind power and solar power has been a long-standing challenge.

A vote for Vanadium? 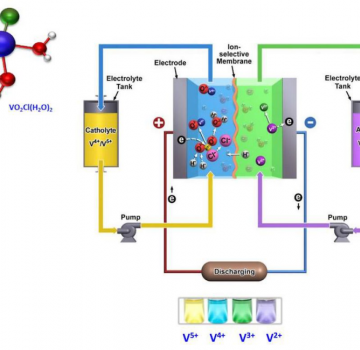 The electrochemistry of the transition element Vanadium and the evolving design of Vanadium redox flow batteries offers a path to large scale energy storage units. The bulk of the engineering problems around VRFB batteries has been resolved and the first major (800MWh) storage plant is under construction in Dalian, China. It is likely to be followed by many others and the global market for VRFBs is set to reach £3bn by 2028 according to energy analysts.

Most batteries rely on two chemicals that change valence state (or charge or redox state) in response to electron flow which converts chemical energy to electrical energy and vice versa. In the Vanadium flow batteries, one electrolyte is used but in varying oxidation states in the form of salt solutions. A crucial component is a membrane that separates them. The solar panels or wind turbine usually provides electrons and pumps push spent electrolyte back through the electrodes, where the electrolyte is recharged and returned to the holding tank. Membrane research associated with Vanadium batteries has opened a whole new program of study among electrochemists and engineers.

Scaling up these batteries to store more power requires more tanks or larger tanks full of electrolyte. The big advantage is in applications where higher or various ratios of capacity to power, that’s the number of kilowatt-hours per kilowatt, are needed – usual ratios are between 5:1 to 10:1. There is no limit theoretically to the energy capacity that can be stored and often the investment costs can actually decrease with an increase in the energy to power ratio, because the energy storage medium usually has a comparatively low cost.

There are other advantages of the VRFB design. They have a lengthy lifecycle; outstanding stability; it is easy to regenerate or recycle the electrolyte and low flammability means they are safe from fire risk. Vanadium redox flow batteries advocates say they offer the best option in terms of design not least because the Vanadium is more abundant than Lithium. Though it is fair to say that the cost of Vanadium extraction does ebb and flow.

The beauty of Vanadium is its flexible chemistry. As a transition element, it is stable in several ionic species in solution, V(2+,3+,4+,5+), each having different numbers of electrons around its nucleus. Fewer electrons give a higher positive charge.

The standard V flow battery design consists of two tanks of liquid, which simply stand inanimate until required. When pumped into a chemical reactor, the two solutions flow adjacent to each other past a membrane and generate a charge by moving electrons back and forth.

Electrochemist Professor Maria Skylass-Kazacos was among the first to grasp how red-dox reactions based around Vanadium salts could be exploited for energy storage.

Born in Greece, Maria has spent most of her life in Australia studying at UNSW. In a fascinating account of her early life and her research, she describes the difficulties of manipulating Vanadium’s oxidation states and their complex solubility problems.

In an interview, some years ago Maria tells how, with her then research student Elaine Sum, she tamed the oxidation state V(5+)using sulphuric acid to prevent it from precipitating. This was the key to the workable Vanadium battery.

“Vanadium is a tricky element which makes it so fascinating. Each of its oxidation states has its own chemistry. To get conditions that will allow all ions to exist at a relatively high solubility was our challenge.

The breakthrough came when she realized that the pentavalent Vanadium salts needed somehow seeding with oxygen to trigger the necessary reaction.

Said Maria: “After many years of studying the mechanisms we now know that if you use carbon as the electrode for vanadium – which is what we were trying to do – the Vanadium oxidation-reduction reaction involves not only a transfer of an electron but also a transfer of oxygen.

“The VO2+ needs to gain oxygen to go to VO2+, and if the carbon is too clean there are no oxygen groups on the surface to allow it to proceed. Consequently, it wasn’t reacting on a clean, smooth surface.”

Another key component necessary for a VRFB is an ion-exchange membrane (IEM). The membrane must be capable of preventing cross mixing of the positive and negative electrolytes, while still allowing the transport of ions to complete the circuit during the passage of current. Membrane design has been a priority in research projects associated with VRFB design technology.

Maria said: “There were other parameters including temperature. Typically, one would try increasing the temperature of the system, because all other ions will increase their solubility with temperature. But not Vanadium(5+). If you increase the temperature, it precipitates. You’ve got to work within an operating window and try to find ways of extending it so that you can operate over greater temperature ranges.”

“It’s turning out nice for Vanadium flow battery systems. Commercialisation has often been hamstrung by high cost of the Vanadium extraction.”

Improved design means it is possible to store more electricity for the same amount of Vanadium through improved chemistry and better cell and stack design. Groundwork on the Rongke Power VRFB, in Dalian, (pictured) China, is underway. It will be the biggest unit in the world so far. It will store 800 megawatt-hours of energy, enough to power thousands of homes.

The UK has so far only dabbled in small scale vanadium batteries. A 1MWh site in Cornwall is operational and a second, used by a farmer in Dorset, has a storage capacity of 1KWh but it is an interesting unit because it has a hidden extra.

Not only is it saving the farm owner more than a third on his energy bill by maximizing the use of cheap, on-site solar generation. According to InVinity, the company behind the project, it is the first in the UK being used to help balance fluctuations in the frequency of the National Grid’s electricity supply. This is another happy outcome of stable secure energy storage in flow batteries.

For the farm owner, it has opened up a new revenue stream in the form of an ancillary service helping the NG to balance out frequency fluctuations from the electricity supply in what is called frequency response.

A spokesman for InVinity Energy Systems in the UK said the arrival of flow batteries marks a potentially significant milestone for the future of energy storage.

The market for flow batteries – led by Vanadium cells – could grow to nearly £1 billion annually over the next 5 years, according to the market research firm MarketsandMarkets.

Better late than never, the Government seems to be recognizing the potential of the technology. It has just passed secondary legislation allowing large-scale energy storage projects to progress without the red tape and expense of navigating the labyrinthine national planning system.

Companies like InVinity can seek permission to create new energy storage projects by applying through local planning authorities, which will be much quicker and easier.